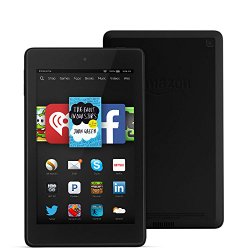 I had mentioned a while back that I had skipped purchasing the new Kindle Voyage e-reader, but did purchase a Fire HD 6. Now that I have had a chance to play with it, I thought I would share a few thoughts on the device. While I upgrade my e-ink Kindles fairly frequently, I don’t upgrade my tablets as often. My perspective in this review, therefore, will focus on comparing it to my older devices.

Just for background, I already own a 1st Generation Kindle Fire and two Fire HDs (1st HD generation, 2012), one that is a 7″ and one that is 8.9. The !st generation fire is old enough that it is not supporting newer apps and games. There is also no way to connect to a television to the device to stream video to the big screen. The 2nd generation fires use a micro-HDMI cable to connect with the TV.

I wanted the HD 6 predominantly because of its size and form factor. I have had eye surgery, so for ease of use, I need something that is bigger than a tiny phone screen (I used to carry my iPod Touch with me). My phone is a Galaxy Note II and I wanted something even bigger that that. The HD 6 seemed like a manageable size and weight to throw in a purse or a bag for a visit to the doctor’s office. And, in fact, that presumption was indeed correct. It is the perfect size to carry around with me. With the cover on, it is just about the size and weight of a library binding paper back. It is lightweight enough to be comfortable, but hefty enough to feel substantial.

The headphone jack,  power button and micro-usb charging port are located at the top of the device, which I also like. On the original Fire, the charging port and headphone jack were at the bottom, which made it very difficult to hold the tablet vertically and read or listen to music. On the 2014 models, the charging and micro-HDMI ports were positioned on the side. This made certain cases awkward to use with the device,  especially when connected to a TV.

I also liked the fact that the Fire HD 6 does have substantially-sized physical volume buttons which are placed in a convenient position on the upper left side of the tablet. I tend to pick my tablets up from the bottom or the middle, so this is perfect for me. On the first generation Fire, there was no physical volume button. Everything was done via software and it was very inconvenient to use for games, videos and music. On 2nd generation Fire, the button were small and badly placed on the ends of the device. Those buttons were very hard to use because they were hard to find by feel alone.

While it doesn’t impact the function of the device, I liked the fact that the Fire HDs come in colors and  not just black. I bought myself a white one.

Unlike the earlier generations of Fire HDs, the Fire HD 6 ahs both front and rear facing cameras. The quality is about what you would expect for VGA and 2MP cameras ( not great), but it would be sufficient for Skype.

The Fire HD 6 has an up to 1.5 GHz quad core processor, faster than both the original original Fire tablet (1 GHz dual core) and the earlier Fire HD 1.2 GHZ dual core models. Out of the box, the initial response was pretty snappy. 🙂

There have been small tweaks made to the appearance of some of the programs. The carousel and memu bars look slightly different and a few names have changed. Notifications off is now easier to find and called Quiet Time. Orientation Lock is now called Rotation Lock and is also easier to find. I also found that I really needed that function because the gyro on my device is pretty sensitive.  I also found that the text-to-speech controls are much easier to find from within a book than they were on the previous Kindles and Fire tablets.

There are a couple of new features that I really like. Goodreads is integrated into the Fire in a way that seems to me to be much more organic than it does for the Paperwhite.

My favorite new feature is the addition of voice recognition to the Kindle Fire HD 6. None of my previous Fires had this capability.You can use a microphone or a headset with a microphone to dictate into any of the note or word processing programs. I use a set of JLab Headphones with microphone for mine.

The biggest new capability that makes this tablet really stand out is the profiles and shared library feature for OS 4.5.1. It was a bit tricky to set up as Amazon was still rolling out the feature and changing the instructions when I was working on it. I plan to write a entire post on setting up the sharing library and will come back and link to it here when I do.

Like many couples, my husband and I shared an account when we got my first Kindle. So all the early books we bought, all the videos, and all the music was put on that account. When I started blogging, I set up my own Amazon account so that I could have verified purchases under my own name for review purchases. That has made it difficult to share content – and is part of the reason we had two Fire HDs. Now, we can share all that content between accounts on both the Fire HD 6 and our Kindle Paperwhite 2 e-readers.

One of the few downsides to this tablet is that the built in speakers are only mono sound. However, the headphone jack is stereo and device features Dolby sound. The tablet also has only single band wi-fi, but so far, I have not had any problems with connections.

Personally, I am not a huge fan of the Amazon covers for the tablets. I did try the Javoedge Kindle cover that I wrote about in this post, but the cover was too wide to safely hold the Fire. I am currently using a lightweight MarBlue Fire cover which is working quite well for me. This cover does NOT have a wake/sleep function built in to the cover, but since that is not a feature I personally care much for, that is really not important to me.

I am really enjoying the Fire HD 6. I have to say that this is one of my favorite devices at this point. With the features this tablet has,  I think that this is an amazing device, especially for only $119.

If you have any questions about the device, let me know in the comments. 🙂